Asthma incidence has increased dramatically in the United States and globally in recent decades, making asthma one of the most common chronic diseases in the world. It is estimated that around 300 million people in the world currently have asthma; estimates could be considerably higher with less conservative diagnostic criteria. Asthma incidence is also uneven, affecting poor and minority communities in greater numbers. It is also widely acknowledged that available models of causation cannot explain current rates of asthma. Researchers from many different disciplines and perspectives, in many different geographic and organizational contexts, have tried to figure asthma out, but it remains elusive. Asthma sufferers and caregivers also struggle daily to make sense of asthma, trying to understand the rhythms of incidence, triggers, and effective modes of care, prevention and communication. The Asthma Files project aims to bring all these groups into conversation.

The Asthma Files is an electronic archive of text, still images, video and audio that illustrate multiple perspectives on asthma-- from the vantage point of affected people in different locales and communities, heath care providers, and scientists from many different disciplines. The Asthma Files include images of lungs conceived of as a complex system, for example, accompanied by an annotation that explicates how this implicates understanding of asthma incidence, and response to asthma therapies. The Asthma Files also includes images of how genes express in allergic asthma; images of air pollution correlated to asthma hospitalization rates; and images that convey the extraordinary and socially uneven prevalence of asthma in different locales today. Explicated, one can see very different logics and scales of analysis in play. Physicians for Social Responsibility, for example, have linked escalating asthma rates to global warming. WeAct, an environmental justice organization in West Harlem, links asthma rates and incidence to local sources of diesel pollution. The Asthma Files brings these perspectives together, aiming to leverage what historian of science Evelyn Keller calls “explanatory pluralism.”

Mike Fortun and Kim Fortun first envisioned The Asthma Files while participating in an NIH-funded collaborative effort (led by health policy researcher Alexandra Shields, director of the Center for Genetics, Health Disparities and Vulnerable Populations at Harvard) to develop gene-environment interaction research responsive to health disparities, using asthma as a case study. A key goal was to identify genetic study designs that incorporated robust environmental indicators. Towards this, Kim Fortun was part of the organizing group for a June 2006 workshop at Harvard that brought together diverse researchers to consider possibilities, and challenges. It was very clear that geneticists, epidemiologists and environmental scientists had had very limited prior contact, and worked with very different kinds of data and conceptual schemes. Further, there was a tendency to think that the group needed to come to consensus to work effectively together. We thus became interested in how explanatory pluralism can be highlighted, deliberated and leveraged, rather than merely managed. The Asthma Files works toward this.

The Asthma Files in an expressly experimental ethnographic project that aims to produce, convey and circulate ethnographic knowledge in new ways. It also aims to create new forms of collaboration among ethnographers, and with other social science and humanities scholars, between ethnographers and artists interested in environmental and scientific communication, and with scientists, activists, and others concerned about asthma. Collaboration among ethnographers is supported by a structure that allows differently focused researchers to bring material into The Asthma Files, and explicate it with questions that are shared among researchers. Researchers with material that articulates particular ways of thinking about the etiology of asthma, for example, can work with a set of questions that directs their attention to the genealogy of the articulation, to units and scales of analysis, and to the kinds of supporting evidence provided – denoted in a way that facilitates comparison with other articulations of the etiology of asthma. Over summer 2009, we developed a set of questions that can orient researchers interested in asthmatic spaces, orienting attention to what is known about asthma in a particular space (a city, state or country for example), to specific conditions productive of asthma, and to the infrastructure in place to care for asthma. We now have work underway to map asthmatic spaces in New York State, and in Houston, Knoxville and New Orleans. In the near future, we hope to begin mapping Delhi and other foreign cities as “asthmatic spaces.” 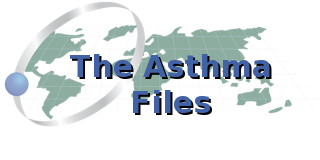